A forum for poker players in Colorado.

Whoa! Thought it would be fun to try a new venue... WRONG!! I like to play all over whether up the hill, local cash games and the "free" tours but this one was hooooorrrrible! Not only do you have to deal your own table (or assign it to someone willing to deal) the play is a joke. There were a few people there on the verge of fisticuffs due to bad calls, bad play and just general BAD (I have never seen chips THROWN across a table like that before!!!)! In my opinion it's a true locals only thing because as an outsider I felt uncomfortable playing my game and lost all interest after the first break. DPT and APT have nothing to worry about w/this joke going around. Yuck!!! 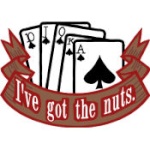